(Note: In the summer of 2012 I was asked to contribute a piece for the next edition of the “Every Wine Tells a Story” book compiled annually by Tara O’Leary. Unfortunately, the book was never published, but here is what I wrote for it, now shared for you here. I hope you enjoy it. ~Cliff)

THEY SAY THAT LIFE is made up of moments. That at the end when we look back on our individual lives certain fragments of time will blink like stars in a dark sky. That along the timeline of our lives certain small personal interactions or experiences will be recalled with laser clarity: distinct milestones – either meaningful or nostalgic – that we may or may not have noticed at the instant of their occasion.

Every once in a while, a lucky wine lover will encounter a certain vino that changes the game, shifts the boundaries of perception, and leaves one stunned, mystified… Gaping like a beached fish, overwhelmed by the mysteries of the universe, by the inexplicable ways that wine evolves in the bottle. A wine that transcends this world and dispatches the drinker’s consciousness into a parallel dimension where muses enlighten, angels and deities celebrate, and the sands of time flow not to make us old but to revive us with revelations and new discoveries.

In 2012, I had the honor of being visited by one such wine – a 1963 Graševina “Arhivsko vino” (archive wine) from the Kutjevo winery (a historic bastion of cellared treasures in the Slavonia region of Croatia) on two separate and equally memorable occasions: once at the winery, and subsequently at a vertical tasting workshop of aged graševina wines called “Wine of Grace” at the Zagreb Wine Gourmet Weekend in Croatia.

Tasting the same wine on two separate occasions did not diminish the profundity of my experience but reaffirmed it. Indeed both encounters left me paralyzed in awe, helpless to summon my professional sommelier training to conduct a point-by-point assessment and expound pretentiously upon the wine’s merits and misdemeanors.

Instead I sat there dreamy-eyed, slack-jawed and loose-limbed, struggling to suppress the urge to whimper and weep like a baby. Lost in this dumbfounded comprehension of the implications associated with being touched by such a wonder of creation, I yielded to its mysteries and allowed myself to be absorbed.

Forty-nine years of dormancy and leisure in a mold-crusted cellar deposited a patina of fossilized dust and organic matter on the bottle, cloaking it in ash-colored velvet. I watched with mixed emotions (excitement, sorrow, anticipation, unworthiness) as the bottle was opened, revealing a cork that was amber and black with age, ripe and moist. 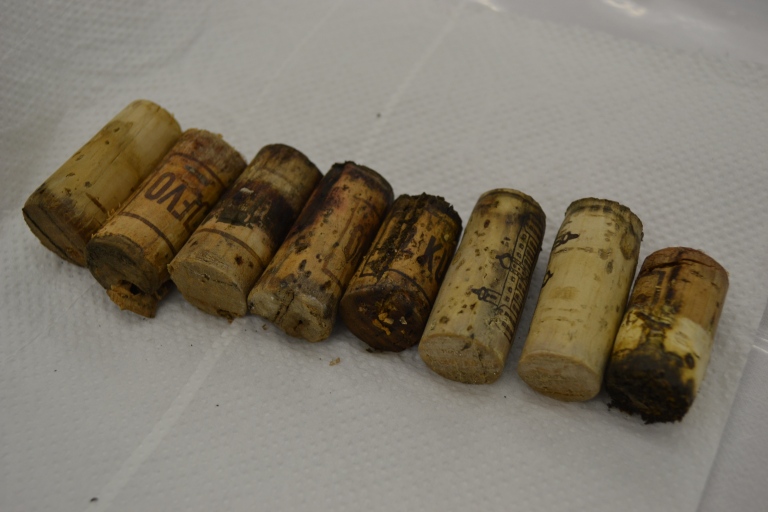 What emerged from within was a beautiful liquid genie: older and wiser, perhaps, but no less enchanting with sultry hues of gold, a brilliant clarity and regal structure. Now exhumed from her confines, this “wine of grace” released – or rather, bestowed upon us like a cherished, granted wish – an alluring, continuously unfolding tapestry of rich aromas: honey, roasted nuts, candied citrus peels, autumn bouquet, buttered forest mushrooms, something akin to apricot cobbler….

Ensconced as I was in such a blissful stupor – sniffing, swirling, marveling – I quietly flipped back pages of history. Over the decades in which the 1963 Graševina laid still in the damp darkness of its lonely old cellar in Kutjevo,  the world outside the cold stone walls was bustling, with many things coming to pass: my parents’ marriage; my birth; Beatle Mania; the deaths of Elvis and John Lennon; the Vietnam war; Jimi Hendrix’s ascent to guitar god; Watergate; Apollo 11 and Neil Armstrong; the heady days of Led Zeppelin; the ’69 Mets; the first Apple computer; Disco; mullet haircuts; Jaws; the Space Shuttle; Michael Jackson’s lifetime; the fall of the Berlin Wall; the break-up of Yugoslavia and the war in Croatia; Seinfeld; cell phones and smart tablets; the Millennium; September 11th; endless wars in the Middle East; Facebook and memes; the unrealized Mayan prophesies; the first African-American U.S. president…..

Like wrinkles and wisdom, history was now woven into the wine’s fabric. While graševina is not a wine noted for its noble pedigree or ability for long-term aging, the 1963 from Kutjevo winery decisively dispelled any generalized notion about the inability of certain white wines to age. Barely frayed or faded, it was clearly still a living thing, delivering layer upon layer of rich texture, exotic nuance, and vibrant character.

I was not the only one to notice. Judging by the reflective silence and mesmerized faces of those with me, the moment in time we collectively shared while in the throes of vinous enlightenment was truly an enchanting and unforgettable experience.

A wine of such grace and rarity may not come our way everyday. But if you ever have the opportunity to discover an older vintage or indulge in a unique bottle of some strange varietal wine from a far-off land, please don’t miss it. The experience may turn out to be one of those moments in life that you will treasure forever.

IF THIS WINE were a celebrity it would be Meryl Streep: an actress of such grace and charm who grows more lovely, sophisticated and relevant with age. Like Mona Lisa on canvass, on screen Meryl shines with just the right balance of profundity, grace and sass, coddling the soul, providing comfort to the heart, and stoking the fires of imagination – all this while defying the ravages of time with her elegant poise, child-like charms and timeless beauty. (Note to Meryl: I still have one more bottle of the 1963 Kutjevo Graševina in my cellar. Stop by anytime. I’d be happy to open it for you.  🙂 )